The Iberian desman is characteristic in the following habitats: 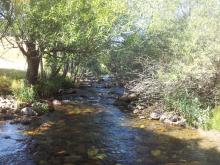 Description and State of Conservation:

This type of habitat is distributed along the western and northern Iberian river banks, with the most common found in siliceous areas.

The Spanish term aliseda (alder grove) refers to the first line of riverside woodland located along the banks, which have very wet or sodden soil and are affected by occasional rising waters. This type of woodland is very thick and shady, above all along the steep riverbanks where the crowns of the trees on each side make contact with each other to provide galleries. The lack of light limits the presence of woody elements, although Frangula alnus, Crataegus monogyna, Sambucus nigra, Evonymus europaeus, Salix salviifolia, etc can be seen in the more open alisedas. The herbaceous layer includes Ranunculus ficaria, Glechoma hederacea, Oenanthe croccata, Carex laevigata, etc.

In the western alisedas, in those with Mediterranean climate, there are usually Fraxinus angustifolia; most of the Euro-Siberian trees are disappearing, but a cluster of typical flowering deciduous trees remains, with several species that are distributed over western Iberia (Galium broterianum, Scrophularia scorodonia, Carex paniculada subsp. lusitanica, etc).

Fauna is closely associated with the presence of water, with birds such as the grey wagtail or the white-throated dipper, and mammals such as the Iberian desman, the Mediterranean water shrew or the otter.

These woodland masses, according to Council Directive 92/43/CEE, are “(Sub) natural woodland vegetation comprising native species forming forests of tall trees, with typical undergrowth, and meeting the following criteria: rare or residual, and/or hosting species of Community interest”. In this case they are considered a priority, which means natural habitat types in danger of disappearance, which are present on the territory referred to in Article 2 and for the conservation of which the Community has particular responsibility in view of the proportion of their natural range which falls within the territory referred to in Article 2; these priority natural habitat types are indicated by an asterisk (*) in Annex I.

This type of woodland has traditionally been used for timber, which has steadily conditioned its density, although the decreased use of this fuel has favoured regeneration.

Description and State of Conservation:

Poplar and elm and willow groves distributed along the riverbanks of the whole Iberian Peninsula, Balearics and in fragments in Ceuta.

They grow along river and lake banks, or in places with soil that is at least temporarily swamped or damp, always at baseline or medium altitudes.

In the water courses, vegetation forms bands parallel to the flow depending on the degree of humidity in the soil.

The second band is made up of poplar groves, with species of Populus (P. alba, P. nigra), tree-like willows (S. alba, S. fragilis), ash trees, alders, etc. Elms (Ulmus minor) grow on the wider valley floor, further away from the water, where more climate-dependent species live. On the rivers to the north of the Peninsula, the riverbank vegetation is limited to shrub-like willows, with species similar to those mentioned above and another (S. cantabrica) typical to the region. At times there is a second band of aliseda (91E0), black poplar or ash.

Birdlife is a feature of these forests, with species such as the European penduline tit (Remiz pendulinus), the Eurasian golden oriole (Oriolus oriolus), the white-throated dipper (Cinclus cinclus), etc. The mammals include the otter (Lutra lutra) and the Iberian desman (Galemys pyrenaicus).

This type of forest has traditionally been used for firewood, which has conditioned the density and tree shape as the traditional system has left cut-back stumps, although consumption has reduced.