The main threats to the desman and its hábitat that can be considered are: 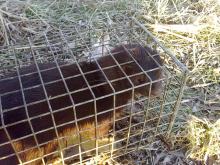 The Iberian desman is a semi-aquatic species that is negatively affected by alteration in the chemical composition of water because, among other reasons, it affects the benthic macroinvertebrates it feeds on. There are several causes for reduced water quality, and these include the mining activity carried out on the southern slopes of the Cantabrian mountains, where heavy metals have leached into the river waters. These have entered the food chain, initially through macroinvertebrates and then on into the ichthyhofauna and fauna that feed on them, such as the Iberian desman.

Likewise, the accumulation of sediment on riverbeds, resulting from the erosion of areas adjacent to the course, alters the water’s chemical composition and reduces the abundance of macroinvertebrates. Other activities, such as sand and cement extraction, modify the river’s water balance and the base on which the benthic community, the desman’s food, settles. The population rise in urban areas in the mountains, particularly during summer, causes an increase in water consumption and, as a consequence, an increase in the volume of insufficiently treated waste entering the rivers.

At the same time, the extraction of water brings with it a temporary decrease in circulation on the surface of the river course, which the desman cannot be without at any time. This means that agriculture and livestock farming are two activities that directly affect the desman’s ecosystem.

Discontinuity across and along the river course.

The use of water for economic activities such as agriculture and livestock farming has generated an increase in demand for it and this has led to the flow of water being considerably diminished. Structures built to collect water have made it difficult for the desman and the ichthyhofauna to move about. The existence of dams without throughflow produces uncontrolled depletions of water that lead to reductions in flow that fall below even an ecological level.

In the same way, the use of water for electricity power generation has made it necessary to build dams and mini hydroelectric power station that alter the water balance and act as a barrier stopping the desmans moving along the basin. This means that small groupings of population are created, in which the risk of stochastic or catastrophic extinction is hugely increased. Furthermore, recolonisation by survivors from other points along the basin is impeded. At the same time, the sheet of water formed upriver is a habitat in which the desman cannot survive due to the excessive depth and lack of circulation. Downriver, the artificial regularity of flow, caused by sudden releases of large quantities of water alternating with insufficient flows, affects the habitat of the benthic macroinvertebrates the desman feeds on.

Desman populations find themselves fragmented both between basins and along the same basin. This conclusion is based on studies that have been carried out and cited recently.

As the populations are smaller, they become more vulnerable to all other threats, as well as becoming genetically less variable, which hampers adaptation and reproduction in the long term.

Deterioration of the habitat (fluvial banks and courses)

The riverside forest and the woodland along the banks, or alisedas, ash groves and gallery forests of Salix sp. have suffered a major reduction particularly in areas affected by humans or that have been made artificial without taking into account the effects on the environment. At the same time, artificial regulation of river courses for power generation has habitually led to gaps in the vegetation. Likewise, dwindling flows caused by running water off alter the structure of habitats, as normal growth of plant species is affected. A weakness is produced and, consequently, the species are more prone to diseases and the intrusion of allochthonous species.

On the other hand, the destruction of riverbanks and their natural vegetation can affect the desman’s nesting and refuge sites. In these cases there is greater exposure of the river to sunlight, which increases water temperature and affects the desman’s catch.